My project MKVToolNix has used the boost::filesystem library for a long time. It allows for easy path manipulation (e.g. “what’s the parent directory”, “does the named entry exist & is a file” or “create all directories for this path that don’t exist yet”). The central class of the library is boost::filesystem::path which encodes an absolute or relative part of an entry in the file system and offers various functions for modifying, querying or formatting it. All utility functions such as the aforementioned “create all directories” take path instances as arguments.

All of this worked mostly fine.

After release v53 of MKVToolNix a user reported an issue with using Emojis in file names. Turns out this wasn’t trivial to debug and is likely a bug in boost::filesystem or in the way I handled character encoding (more on that later).

This motivated me to look into converting MKVToolNix from boost::filesystem to std::filesystem which had been added to the C++ Standard Library with C++17. Its design is based heavily on boost::filesystem: a lot of the classes & functions are named identically within the two namespaces and most of their semantics match. As I’m eager to reduce the number of third-party libraries by using C++ standard libraries where it makes sense, converting my code base seemed the obvious step.

I mean, how hard could it be? Right?

The most glaring difference in my opinion between the two libraries is how they handle encodings/character set conversions for the path classes. In both libraries the path class offer constructors for instances of std::string and std::wstring. Internally the classes use either std::string or std::wstring for storage depending on the operating system they’re compiled for: wide strings (std::wstring) for Windows and narrow ones (std::string) everywhere else.

This means that the constructors taking the string type that doesn’t match the storage type (std::string on Windows, std::wstring everywhere else) must do character set conversion, either from narrow to wide (Windows) or wide to narrow (Linux). This is where things get really dicey.

MKVToolNix’s internal string handling uses UTF-8 encoded narrow strings everywhere. For file names, too[1]Yes, I know that’s bad as file systems on Unix aren’t guaranteed to have any type of encoding; file names might contain something that isn’t valid according to any encoding etc. etc.. Therefore the logical choice was to imbue boost::filesystem::path with an UTF-8 character set conversion locale. It would convert between UTF-8 encoded narrow strings and wide strings.

std::filesystem does not do it that way. At all. For the constructor taking char-based narrow strings (pointer-to-char or std::string) conversion from the native narrow encoding is done. On POSIX systems this means no conversion which matches how MKVToolNix is coded: std::filesystem::path receives a UTF-8 encoded narrow string & stores it as-is internally.

On Windows, though, this means that conversion is done from a character set such as Windows-1252 on a German Windows. Oooh boy, this is bad, as that isn’t at all how MKVToolNix encodes narrow strings. So what happens when an UTF-8 encoded narrow string containing non-ASCII characters is passed to std::filesystem::path? Mangled non-ASCII characters, of course. German Umlaute, French accents, Asian characters, Emojis — doesn’t matter. Encodings don’t match, conversion does bad things, file names are messed up.

This thing wouldn’t be so bad for me if the constructors std::filesystem::path were explicit. They’re not, though, meaning string-to-path can hide in various places and are hard to spot. For example:

Here’s one of those conversions that absolutely must not happen on Windows, due to the implicit constructor.

Is this OK? Well, depends on the type of sub_dir, actually. If it is a path already, it’s OK; if it’s a wide string, it’s OK, too, but all narrow string types (char arrays, std::string)? Not so much. And this is really hard to spot or grep for.[2]The "index.txt" argument is fine. Even though it’s a narrow string, it solely consists of ASCII characters that’ll convert properly to wide strings no matter what Windows’ native … Continue reading

I’d really appreciate if my compiler was able to help me out here. Having the constructors explicit would mean neither of these examples would compile and I’d need to add an explicit conversion myself. But the C++ committee didn’t make them explicit, probably for a reason.

My solution was to ban the use of the constructors[3]C++20 will improve this situation with the introduction of char8_t. The constructor taking a char8_t-based narrow string will always convert from UTF-8, avoiding this mess.. Instead I introduced helper functions to_path() that take both narrow & wide strings & assume narrow strings are UTF-8 encoded. These helper functions work differently depending on whether I’m compiling for Windows or other systems.

Let’s take the second example from above. I’d convert it as follows:

Bugs in the C++ Standard Library

std::filesystem is rather new, being added in C++17. I was prepared for bugs to rear their ugly heads. But I wasn’t prepared for how broken certain parts of the gcc standard C++ library are on Windows wrt. to UNC paths[4]I use a gcc/mingw cross-compiler from the MXE project for cross-compiling from Linux to Windows. The same issues would happen compiling with mingw on Windows itself.. A UNC path might look like this: \\server\share\sub_dir\file.txt Without any particular order, here are a couple of issues I ran into (this is with gcc 10.2.0, the latest release at the time of writing):

As I wrote above, this is gcc 10.2.0. Your compiler might fare better, of course. I suspect that Microsoft’s Visual C++ has fewer of those Windows-specific issues, simply due to the amount of experience its developers have with Windows’s peculiarities.

Most bugs that were actually bugs in MKVToolNix instead of the standard C++ library turned out to be due to using the implicit conversion of narrow strings to path objects that I’ve talked about in length above.

There was one bug that was due to changed semantics between the two libraries: what happens if your path is at the root already (e.g. C:\ on Windows) and you call parent_path() on it? boost::filesystem will return an empty path object whereas std::filesystem will return the same path again. This means that loops checking the file system from a point to root have to have their conditions changed. Instead of e.g. while (!path.empty()) you’ll have to do something like while (path.parent_path() != path). It gets even nastier wrt. to UNC paths; see this chart for details. I definitely forgot to fix a couple of these cases leading to endless loops.

One problem on macOS is that different macOS versions have different levels of support for C++17. Until this change I used to build for macOS 10.14 “Mojave” and newer, as those supported all C++17 features I used. However, std::filesystem, while being a C++17 feature, is only supported on macOS 10.15 “Catalina” and the current 11.0 “Big Sur”. One of the drawbacks of using current technology.

This is a bit different to older Linux distributions. Let’s take CentOS 7, a rather old distribution. I can still compile current MKVToolNix releases there by installing the latest developer toolset which comes with a current gcc & libc++. For macOS the compiler version doesn’t suffice, though: even if I install a recent XCode version on macOS 10.14, I cannot build code using std::filesystem for it as the standard C++ library on macOS 10.14 doesn’t contain that functionality. I haven’t bothered investigating if it’s possible to include a newer standard C++ library itself in the MKVToolNix disk image.

And on Linux? Was it worth it?

Well… I haven’t had a single issue with so far with the conversion on Linux.

And as to the question whether or not it was worth it: hmm… meh. I really like to reduce my number of external dependencies. That is a tangible gain. It simplifies the build process & reduces build times in various situations where Boost isn’t available as I’m now down to solely using header-only libraries from Boost. And I actively take part in improving the gcc standard C++ library implementation. This is still Open Source, after all; you’re expected to give back & help out. This is how all of our projects grow.

Compiling MKVToolNix can take quite a bit of time. It’s a C++ application, it uses a lot of template code, and it doesn’t make use of the pimpl idiom as much as it could. For years I’ve been using the usual several techniques trying to keep the time down: parallel compilation and pre-compiled headers. However, it still takes quite a lot of time, and that’s a bother during development.[1]I’m also caching compilation results using ccache so that re-compiling is super fast, but that doesn’t help with initial compilation times or if something in one of the central header … Continue reading 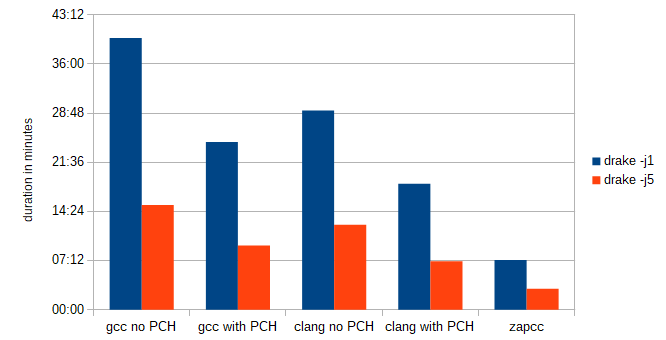 Now those numbers explore the whole range between “no help at all” (no pre-compiled headers, no parallelism during compilation, slowest compiler) and “bells and whistles” (maximum parallelism, fastest compiler). A realistic comparison is between my usual setup and the fastest zapcc variant. Those two numbers are the bold ones above: clang using pre-compiled headers with five running compilers in parallel vs. zapcc with five running compilers in parallel.[2]zapcc doesn’t support pre-compiled headers, hence only one line for zapcc And this is quite remarkable: from seven minutes down to three, down to 43% of the original time. Yes, this does make quite a difference during development.

I’ve released v5.6.0. It fixes a couple of important issues with the new --split parts: functionality. Other bugs were fixed as well. A Polish translation of the programs has been added as well as a Spanish translation of mmg’s guide.

Here are the usual links: the home page, the source code and the Windows installer and 7zip archive.

All of the binaries that I provide myself are already available.

Here’s the full ChangeLog since release 5.5.0:

I’ve released mkvtoolnix v5.0.1. It’s a release with a few improvements/bug fixes and one important fix for a regression introduced in v5.0.0 regarding PGS subtitles.

There were no changes that concern package maintainers.

Here are the usual links: the home page, the source code and the Windows installer and 7zip archive.

All of the binaries that I provide myself are already available.

Here’s the full ChangeLog since release 5.0.0: