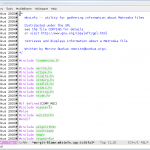 16 thoughts on “An interactive, iterative ‘git blame’ mode for Emacs”